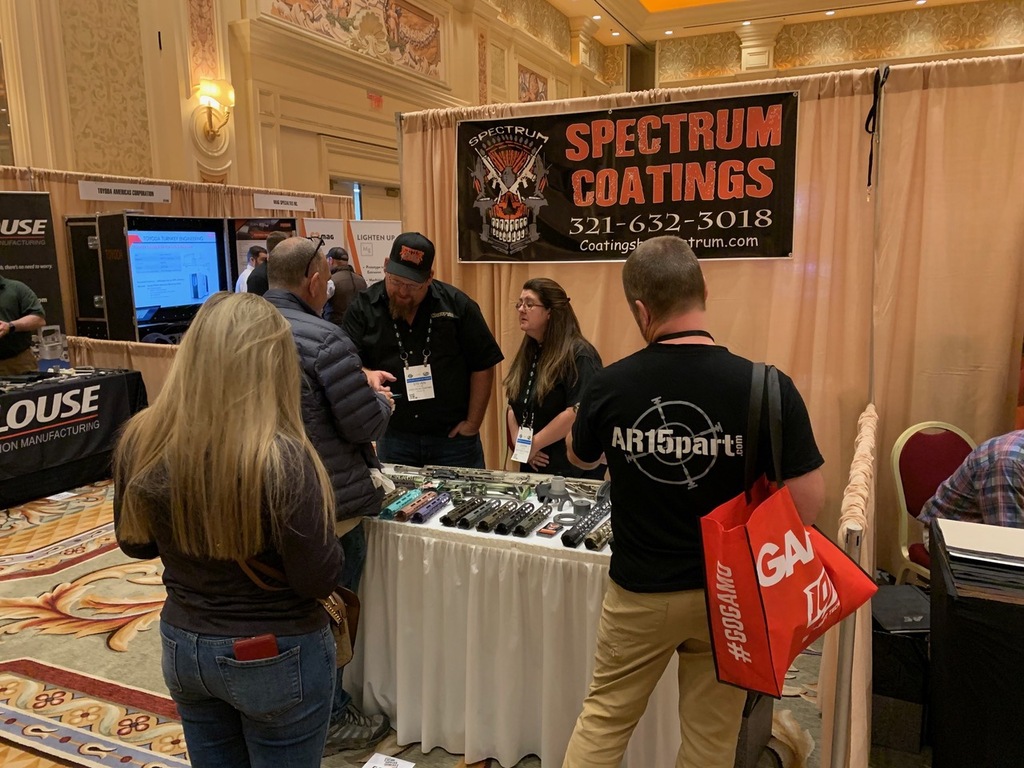 If you were at SHOT Week this year, January 20-25, or ever been, then you know about the absolute magnitude of the event. Let me say – it’s all true. SHOT Show 2020 in Las Vegas was enormous (which is why my feet hurt!). It brings attendees and companies from all over the world together to showcase the latest and greatest in outdoor gear, from hunting rifles to concealed-carry pistols, knives, and pretty much everything in between. Throughout the week, there was a chance to showcase our business and check out new products amidst celebrity sightings and as always, the business of meeting with suppliers, customers, and media.

We have attended the show before, but this year, Spectrum Coating participated with our own booth in the Supplier Showcase, where we exhibited our firearms coating products. This dedicated event was loaded with 500 plus suppliers sporting countless materials and solutions presenting their products to shooting, hunting, and outdoor manufacturers. For two very full days, we were on the show floor meeting with potential new clients who were interested in customizing their guns with the hundreds of durable and unique finish options available from Cerakote and Hydrofilm coatings.

An avid supporter of the military and first responder families, we were proud to meet with representatives of Zac Brown’s Southern Grind (we had completed a firearm project for the band’s foundation a while back). Some of the companies who stopped by included: Kimber Manufacturing, the world’s largest producer of 1911 pistols; Beretta USA Corp. who has been in production since 1526; Aero Precision, a gun manufacturer whose roots are deeply tied to the aerospace industry; and ODIN Works Manufacturing, a favorite of competitive shooters, and officially endorsed by the U.S. Army Marksmanship Unit.

We enjoyed sharing our Spectrumized “We the People” AR-15 with Michael Marshall, co-founder of the Liberty First Foundation, and the “Why So Serious” with Charlie Spires, co-founder of Black Rain Ordnance, a Missouri firearms company. An ah-ha moment was when the U.S. sales manufacturer of high-end scopes brought by his Chinese counterpart. Though his coworker knew all about scopes, he had never looked through one attached to a firearm (guns are strictly controlled in China). It was really awesome to see him cautiously lift it to his shoulder, point the scope toward the ceiling, squint his eye, and see the broad smile that came across his face.

On Wednesday and Thursday, we were able to experience the full show, which was a bustle of activity. It covers about 700,000 square feet or close to 16 acres of exhibit space. If a person walked down each aisle of the show, they would cover a distance of 12.5 miles, so wandering and window shopping are not practical. Most people go in with a plan of attack knowing which booths or exhibit areas they want to visit. Those spots are marked by small stickers on the floor and huge directional signs on the ceiling. As well, we found the map of all five levels of the show floor to be a necessity.

As always, we at Spectrum enjoyed spending time with and seeing the success of long-time Florida clients, Iver Johnson Arms Inc. of Rockledge, and Kel-Tec based in Cocoa.